“Okay, I’m working on my personal brand,” said my friend Keith on the phone. “I’ve been writing down words that describe me. So far I’ve got Strategic, Seasoned and Results-oriented.”

“Geez Louise, Keith,” I said. “I’ve known you for ten years. I wouldn’t put any of those lame-ass labels on you. To me you’re quick-witted and funny and charismatic.” “You’re very kind,” he said. “No way,” I said. “I’m being honest. I wouldn’t let you brand yourself as Seasoned and Savvy, or whatever you said. ”

“But don’t hold back, Liz,” laughed Keith. “Tell me how you really feel.” 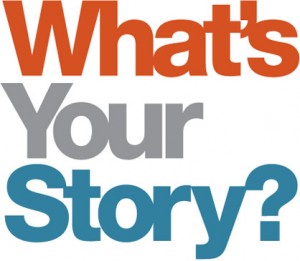 “This is how I feel, my brother,” I said. “You aren’t going to find adjectives that will brand you with the Keith-power that anyone can feel within three seconds of meeting you — even over the phone. Adjectives aren’t going to do it. You’re going to have to tell your story.”

“Tell my story, as my branding?” asked Keith. “As in ‘I grew up in New Jersey and went to school in Vermont’ kind of story?”

“Well, I’m not sure all of that is relevant,” I said. “It might be — it depends what you want your brand to be. If I were writing a LinkedIn Summary for you right now, I’d say something like ‘I started out in Chemical Engineering and followed that path until I went into a manufacturing plant after college and realized that I love designing manufacturing systems.”

“I’m kind of touched that you remember that much about me,” said Keith. “But the reason I remember that is because that’s how I think of you!” I said. “To me you’re funny-charming-Keith-who-was-a-chemical-engineer-and-then-fell-in-love-with-manufacturing.” That’s the brand you’ve established in my mind. If that’s the brand you want to establish in other people’s minds, you only need to tell the story to more people.”

“Why is that a good brand for me?” asked Keith. “I can’t say that it is, but that’s how I think of you,” I said. “You might like that brand — I started out doing X and found that I love Y more, and made the switch — if you want people to understand a bit of your journey and the way you’re wired. The story shows that you make your own decisions. It shows that you do work you love — a pretty important distinction, if you think about it.”

“If I were going to tell that story, I’d add in the fact that I went back and got an MA in Literature, too,” said Keith. “Bravo!” I said. “More differentiation. There are manufacturing VPs and CEOs who want broad-minded people. You see, when we fold into the story the MA in Literature, we don’t need to say ‘I’m a Renaissance Man’ or ‘I’m a broad thinker.’ It goes without saying. It’s in the story.”

“But you’ve written before that a personal brand is not about our degrees,” Keith pointed out. “For sure!” I said. “Your brand is not ‘I have this and that degree, and this many years of experience.’ There’s no emotional power in that. Your brand is ‘I am Keith, and here’s the path I’ve been following, and why.’ The degrees are part of it — you’re going to wrap them into the story, not just list them, free of context.”

“It’s funny that you just used the word ‘context,'” said Keith, “because that word just popped into my head, too.” “Context is the whole deal,” I said. “Who you are, where you’ve been, where you plan to go — it’s all context. Disembodied lists of Skills and certifications and degrees and employer names don’t make up a personal brand. A brand is holistic. It’s all of a piece. We want people who come across your LinkedIn profile to get you, if they are capable of getting you. If they aren’t capable of getting you, we want them to move on. You don’t have time for people who can’t get you.”

“I love you,” said Keith. “That’s how I feel, too. I don’t have time for people who want to quibble with me about some certification or other. Heck, if I don’t impress them when they meet me, they should leave me alone.”

“They should flee,” I added. “Run away as fast as their legs can carry them. It’s a branding world. The right people find the right people. Thank goodness for the English language, right?”

“It’s a pretty good one,” agreed Keith. “One million words,” I said. “The author Bill Bryson says English is the only language that has or needs a thesaurus. That’s BA, don’t you think?”

“Definitely,” said Keith. His brand is his story. It’s a great story. Why would he (or any of us) want to keep the story under wraps?

About Liz Ryan
Liz is is a mom and and a workplace and careers commentator.  Follow Liz Ryan on Twitter: www.twitter.com/asklizryan

Your Story Is Your Brand

Is the customer always right?