Written by John M. Eger appeared in Huffington Post on 4/2/12.

It started in a little town in Venezuela almost 35 years ago, made its way to cities in the U.S. and is now a global phenomenon. El Sistema, which doesn’t translate well, means simply “the system,” a system for giving young, usually poor kids, a chance on living.

At first glance it’s about music. Getting young people to play an instrument, then joining an orchestra. It is that for sure, but so much more.

“El Sistema,” according to Gustavo Dudamel, music director of the Los Angeles Philharmonic and a graduate of the program, is a “visionary global movement that transforms the lives of children through music.”

In a review of the book called Changing Lives by Tricia Tunstall, it states “the overarching goal of El Sistema is unwavering: to rescue children from the depredations of poverty through music.”

Not surprisingly, El Sistema has spread like wildfire throughout the U.S.

In just the last few years, it’s taken hold in Boston, Brooklyn, Baltimore, Los Angeles, San Antonio, San Diego and over 50 other cities across the country. According to El Sistema USA, “The country now has over 60 children’s orchestras, almost 200 youth orchestras, 30 professional adult orchestras and dozens of choruses.”

Dalouge Smith, president of the San Diego Youth Symphony says, “El Sistema is really a new way of thinking about music education. It is about building community and productive citizens through the group experience of ensemble and orchestra.” But he adds, “ 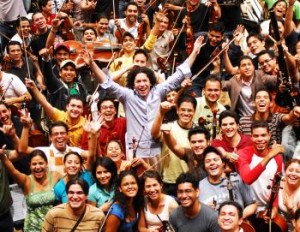 Movement in the U.S. is so new and growing so fast that we don’t yet have longitudinal nor deep data on its impact. Nonetheless, there are some early stage promising results.”

What we do know from data compiled in Venezuela where the program now accounts for over 400,000 young people each year, is that attendance in school is higher and the dropout rate significantly lower; that students who participate in El Sistema are very active members of their community, and perhaps as result of all of the above, tend to have more success entering the workplace.

We know also from Erik Holmgren, program director of the Sistema Fellows at the New England Conservatory that “parental and community involvement is very high.”

Dan Trahey, director of Artistic Program Development for OrchKid in Baltimore, reported that they too, “involve not only the parents, guardians and participating children, but also the entire community through partnerships and community events.”

Baltimore’s goal, in fact, is “to see that students from the program become the leaders of their school in academics, music and school citizenship; that they become top candidates for prestigious high schools and collegiate programs; and over the course of time that they become leaders that give back and strengthen their community.”

Dan Trahey is also carefully tracking the progress of kids in his program, and as suspected, he reports not only significantly increased attendance, but also higher reading and math scores, and SAT scores for students participating in the El Sustenma program

Talking to only a handful of cities where El Sistema is at work, one finds quickly that the program is extremely attractive to the students and their parents. The testimonials are glowing. They are attractive too, because all the programs take place on school sites or nearby community centers in underserved communities; and are completely free. Even the instruments, usually new, are given to every child in the program to begin their musical journey.

The net net is that El Sistema, as people involved have said, is “a new model for social change.” It is one that changes young peoples lives and prepares them for a bold new future too.

There Is Something About El Sistema

The Making of a Corporate Athlete