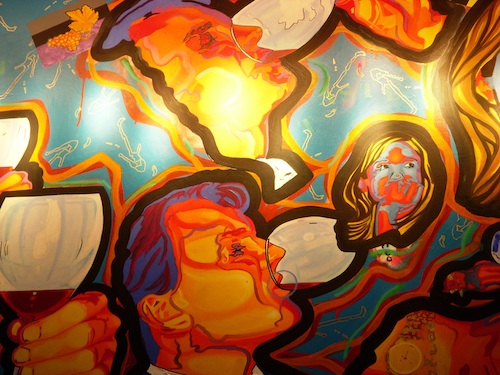 More and more however, cities are thinking about such art and cultural districts as one way to insure the city attracts, nurtures and retains the creative workforce it needs to succeed in the new economy.

The National Endowment for the Arts (NEA) launched a grant program called “Our Town” to encourage new thinking about the role of art and economic development. Toward that end, they funded over 50 sites in cities across the US, many who said they had unique ideas for art and cultural districts. One such effort was in Boston. Starting with a $50,000 grant in 2010, an exciting effort is taking shape called The Boston Innovation District.

Located in the south Boston waterfront, the District has The Institute of Contemporary Art’s flagship Museum, a Children’s Museum, numerous contributions of Public Art, a bank, advertising agency, and a law firm and importantly, the kind of entrepreneurs and artists proper that fuel the new economy.

In the last two years, the District has boasted, “new life science and technology companies have been moving in at the rate of one every week.” As the Boston Globe reported, “100 companies and 3,000 jobs have come in, bringing a laptop-toting crowd to an area long known for its gritty working seaport and artist studios.”

Boston’s mayor, Thomas M. Menino, recently announced a $5 million plan for an Innovation Center in the Innovation District, “a 9,000-square-foot public gathering and meeting space to be constructed by autumn in what’s now a parking lot wedged between Seaport Boulevard and Northern Avenue, near the new Institute of Contemporary Art” according to New England Cable News.

Another such art district is in downtown San Diego. With no NEA grant but with funding from private investors, I.D.E.A. for Innovation, Design, Education and Art has recently begun building an arts district that will stretch over 35 city blocks in East Village. This plan, like the one in Boston, is more than just art, more than just another real estate development too. It represents another powerful model for cities struggling to get on the global information highway.

I.D.E.A also has housing units and offices catering, obviously, to people who live and work in the area but open to anyone who wants the amenities of an arts district and a highly sustainable, livable community. In fact, as the developers believe, it will be Mecca for “scientists, students, engineers, artists, designers and architects, whose economic function and personal passion are to create new ideas, new technology, and new creative content.”

I.D.E.A. is also “green.” Meant to be a 93-acre sustainable, mixed-use development in Downtown San Diego’s East Village neighborhood, it is intended to be an incubator for artists and designers. I.D.E.A touts its “native vegetation, green open space, and permeable pavement filters storm water naturally and prevents contaminated runoff from entering the San Diego Bay. Forward-thinking transit connections include ample bicycle racks and storage throughout the district, innovative bike and car-sharing programs, and access to various bus and light rail connections. A rubber-tired circulator shuttle reduces the number of car trips needed for workers, residents, and visitors.”

The projects plans also include “green roofs,” “community gardens, edible landscaping, and farmers’ markets” and promises to use nothing but “green building materials and technologies that reduce the neighborhood’s carbon footprint while saving long-term energy costs and creating healthy environments for workers and residents.”

I.D.E.A., like the Innovation District, will transform their cities. The Boston Innovation District and I.D.E.A. are “creative clusters” — early indicators that creative and innovative communities committed to nurturing an economy and society based on the importance of art and culture are being born and new architectures — highly walkable, livable, sustainable cities — are taking shape.

It is becoming clear that art and culture are central to ensuring vibrant economic activity of our cities and the foreshadowing of a whole economy based upon creativity and innovation.

There Is More Than Art in the Art Districts

What can adults learn from kids?