Pinterest, which CEO Ben Silbermann describes as a tool that helps people find inspiration, is now the third-largest source of referral traffic on the Internet.

But growth wasn’t easy for the company, Silbermann told a rapt audience at Y Combinator’s Startup School at Stanford University on Saturday. 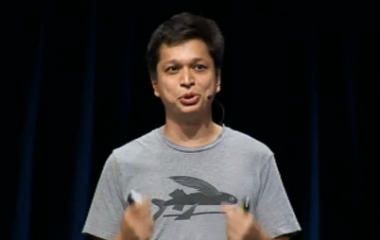 The way Pinterest grew had little to do with Silicon Valley wisdom. It was about marketing — mostly grassroots marketing — not better algorithms.

In 2010, three months after Pinterest launched, the site had only 3,000 users. But some of them were active users, and those people loved the site — and both of those categories included Silbermann himself.

“Instead of changing the product, I thought maybe I could just find people like me,” he said.

So Pinterest started to have meet-ups at local boutiques, and to take fun pictures of people who attended them, and to engage with bloggers to do invitation campaigns like “Pin It Forward,” where bloggers got more invites to the site by spreading the world.

Silbermann said he realized the strategy might just be working when he heard people at a meetup having real conversations with each other about their creative projects, rather than the BS that might come from a superficial relationship on Twitter or Facebook.

“A lot of people in Silicon Valley didn’t get, and I don’t know if they still get, Pinterest,” Silbermann said. “The fact that it made sense to someone is what really mattered to me.”

In its earlier days, most investors weren’t willing to buy into Pinterest and its non-technical founders. (These days, that’s no longer the case.) “There are lots of ways for investors to say no to you, and I’m pretty sure I’ve heard every single one,” Silbermann said.

Investors did want to offer all sorts of feedback about what Pinterest should change. A few years ago, VCs wanted things to be text-oriented and real-time, while Pinterest is visual and more timeless.

Silbermann told the founders and would-be founders at Startup School that they shouldn’t take VC advice and buy into Silicon Valley groupthink, an argument he has made before.

“Fundamentally, the future is unwritten. If they knew, they would be done,” Silbermann said.

Still, Silbermann added that he himself thought for a while that the secret to Pinterest’s growth woes would be finding some undiscovered Stanford grad student to build a better algorithm.

And so if there’s any broadly applicable lesson from Pinterest’s success, he said, it’s that there are many ways to succeed.

Liz Gannes has been a Silicon Valley-based business technology reporter since 2004, where she started her career as a reporter at Red Herring. She was the second employee at the technology blog network GigaOM, where she covered the rise of the social Web.

As part of GigaOM, in 2006, Ms. Gannes founded NewTeeVee, a site that became the preeminent source for news and analysis about Internet video and ultimately the intersection of entertainment and technology.

She graduated from Dartmouth with a degree in linguistics.

The Secret Behind Pinterest’s Growth Was Marketing, Not Engineering, Says CEO Ben Silbermann

Can billion-dollar investments put Qatar on the cultural map?