By Lisa Canning
8 years ago8 years ago
2
ShareTweet

What do the creative industries need most to economically flourish?

We need to be the core of a new kind of creative economic ecosystem. One that supports the spreading of our creative wealth to help ourselves and others achieve economic growth and develop a culture of innovation and creativity.

My ultimate goal with the IAE is to develop a creative entrepreneurial ecosystem that spans several different countries and U.S. cities.

The IAE wants to try and produce the human butterfly effect. We think the climate is just about right to turn on a few high powered table top fans and let some creative leadership begin to blow into a few ripe hot spots around the world. If butterflies are powerful enough to change wind patterns, which science has proven, then its time to try fueling our economy utilizing the strengths of hard core creatives. We want to study our students, and the ecosystem we build, to see what we can learn and what results we can measure from the work we do too.

What if a “bunch of little engines that could”  REALLY COULD restart the engine of our world economy?

And to really accomplish it, what do we need to do?

Creatives need training first. 9 months of it will do. Creatives need to learn how to think. How to act. How to transmit and speak.  And how to train their elephant too. Once they have done that, they need opportunities to be infused like STE[A]M into EVERYTHING we make and do… systematically.  A bit like the industrial age actually. Part of the development of creativity requires repetition which can be delivered to STEM folks efficiently. ETA is working on developing a system in fact right now to embed creatives into corporations, and help government leaders too. But first things first. We have to start with more trained creatives to stoke the winds of change.

I am super excited to read Victor Hwang and Greg Horowitt’s new book that will be released soon. It is #1 on Amazon’s Hot New Release for “New Business Enterprises”.  I met Greg, for the first time, last spring in Washington at a PNB-NAPEO meeting at the Aspen Institute in DC. 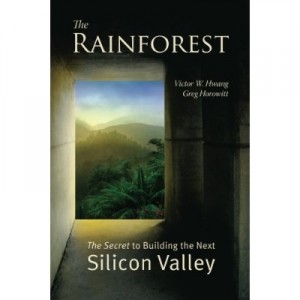 What makes places like Silicon Valley tick?  Can we replicate that magic in other places?
Discover the answers in this groundbreaking book from two of the world’s leading experts at the intersection of venture capital and global development. Victor W. Hwang and Greg Horowitt propose a radical new theory to explain the nature of innovation ecosystems: human networks that generate extraordinary creativity and output. They argue that free market thinking fails to consider the impact of human nature on the innovation process. This ambitious work challenges the basic assumptions that economists have held for over a century.

The authors argue that such ecosystems – what they call Rainforests – can only thrive when certain cultural behaviors unlock human potential. Their theory of the Rainforest is influenced by several breakthrough ideas in academia, including insights on sociobiology from Harvard, economic transactions from the University of Chicago, and design theory from Stanford.

With an unorthodox and entertaining narrative, the book reveals the mysterious mechanisms of Rainforests. Furthermore, the authors provide practical tools for readers to design, build, and sustain new innovation ecosystems. The Rainforest will transform the way you think about technology, business, and leadership.

The Rainforest is being released on February 21st, 2012.

Victor W. Hwang is a venture capitalist and entrepreneur living in Silicon Valley. He is co-founder and Managing Director of T2 Venture Capital, a firm that grows startups, invests capital, and assists the development of innovation economies worldwide. T2VC’s clients have included dozens of investors, governments, and corporations, including the World Bank, the U.S. Agency for International Development, and Cisco, among many others.
Victor has spent his career at the intersection of private venture and public policy. He has founded or been involved in the original team of numerous startup companies. He is the former President of Larta Institute, which mentors hundreds of startups companies for federal agencies, such as the National Science Foundation and the National Institutes of Health. He practiced law as a corporate attorney on transactions ranging from angel and venture investments to multi-billion dollar corporate mergers and public offerings.

Greg Horowitt is a serial entrepreneur, lecturer, and advisor to governments and economic development organizations around the world including the U.S. State Department, Organization for Economic Co-Operation and Development (OECD), and Aspen Institute. In addition, he is co-founder of Global CONNECT, a think tank based at the University of California, San Diego, which focuses on the development and growth of innovation economies.

Under his leadership, Global CONNECT has grown to encompass one of the world’s largest networks of innovation hubs: more than 40 programs in 20 countries. He was formerly the interim Managing Director of CONNECT, an organization which is generally credited with San Diego’s success as a technology leader. He is also a lecturer and advisor to UC San Diego’s Rady MBA Ventures Program.