By Lisa Canning
8 years ago8 years ago
3
ShareTweet 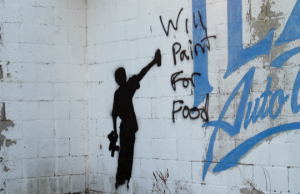 Why is our creativity expressed to us as being indicative of our uniqueness and human potential when we are growing up but when fully professionally developed – dare I say- pretty much ignored???

Is it because it appears to most that creativity is something that requires little effort, or is for the privileged or elite? After all, most of us are so highly trained and college educated, according to Artists in the Workforce– a NEA report released before 2008, that we make our work look effortless and fun. And yet the facts are that the median income as of 2003-2005- pre the great recession, was a measly $34,800- less than an average, not highly creative or unique, professional.

And why is it Willie Nelson, Neil Young, John Mellencamp, and Dave Matthews  are this years line up to help bail out farmers through Farm Aid Concerts while the Creative Class is left to fend for themselves? Has anyone told any of these star-studded icons of creative elitism that while they may be fabulously successful and wealthy that the majority of the artists out there are super hard working professional struggling to be recognized for the value they have? Hey, how about some Creative Aid Concerts guys and drawing some attention to the creative class for all of the economic potential we hold?

Of course we can’t count on our government for any support. The NEA continues to struggle to maintain its ever sliding budget while taxpayers- you and me- have been forced to bail everyone else out saddling generations to come with debt.

And what exactly are we to make of Richard Florida’s predictions in 2006, in his book The Rise of The Creative Class, which touted that global competitiveness would be defined in the 21st century by those able to reap the benefits from being interconnected geographically and philosophically with the creative class? Where exactly are we with employing them, funding them, caring about them and not ignoring them?

I think the article that recently appeared in Salon, No Sympathy for The Creative Class: Art on Crisis written by Scott Timberg, former LA Times arts and culture writer says it best. This is a must read.

The Ignored: Our Creative Class

Is the customer always right?