The Art and Design Legacy of the Apple CEO 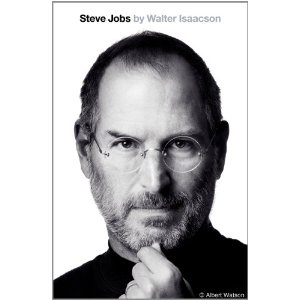 The book by Walter Isaacson about Steve Jobs, former CEO and founder of Apple Computer, has now sold over one million copies.

After talking with many of Steve’s colleagues, Issacson discovered that to Steve, “You were either [a shithead or a hero], one or the other, sometimes on the same day.” Clearly he was not a guy everybody loved. Yet he did “revolutionize six industries: personal computers, animated movies, music, phones, tablet computing, and digital publishing. You might even add a seventh: retail stores, which Jobs did not quite revolutionize, but he did re-imagine.”

Isaacson also discovered that in all Apple’s products “technology would be married to great design, elegance, human touches, and even romance.” On a personal note, Isaacson added, “The creativity that can occur when a feel for both the humanities and the sciences combine in one strong personality was the topic that most interested me in my biographies of Franklin and Einstein, and I believe … will be a key to creating innovative economies in the twenty-first century.”

Maybe it takes the tragic death of an icon or another earth-shattering event to get our attention. Leonard Shlain, author of Art and Physics: Parallel Visions of Space, Time and Light (1993), early on noted the symbiotic relationship only now becoming commonplace. Maybe Jobs even read Shlain’s book.

There is now more talk, more awareness of the importance of art and design. And there is a greater recognition that our schools, our communities, our attitudes must change.

This new awareness, new recognition is vital. One might say understanding the challenge of the new global economy is even critical. It demands that we renew and reinvent ourselves to better understand and appreciate the arts (and of course the sciences) and importantly, the esthetic makeup of the places where we live and work. There is no alternative short of letting our cities and our communities atrophy and die, and with it, the great experiment in freedom and free enterprise we so highly value.

We created the pen-based computer, the silicon chip and the Internet itself, now the vehicle for every nation, every city, and every community worldwide to compete with every other. We can be proud of what we have accomplished, but we must be mindful that a new — truly global –economy has been unleashed.

This intersection of art and technology is the future for America. Creativity and innovation will be the hallmark of our greatest corporations, our workplace, and our most enterprising communities.

Does all creativity come from the arts and so-called creative communities? Of course not, but the chances of nurturing creativity through arts based training is a no brainier.

Arts learning experiences play a vital role in developing students’ capacities for critical thinking, creativity, imagination, and innovation. These capacities are increasingly recognized as core skills and competencies all students need as part of a high-quality and complete 21st-century education.

This of course is why STEAM — the idea that the arts are as important as science, technology, engineering and math (STEM) — is so important. It is also why cities and regions must have creative people by nurturing its young people and, reinventing a system of education that engenders the new thinking skills to meet the challenges of the new economy.

Government has a vital role too. Promoting accessible broadband and encouraging land use policies that encourage development of creative economic clusters including art districts, public art and art and cultural institutions such as museums. Governments can also embrace green initiatives, which encourage private sector initiatives and foster the concept of sustainability. And they can use technology to improve productivity, foster new, more efficient delivery of government services and encourage business and the non-profit sector to use technology as well.

Involvement by the whole community will be needed to make meaningful changes and civic collaboration or engagement is critical. New and existing organizations responsible for planning and development and for weaving the fabric of the new community demand that all institutions and individuals become owners of the new agenda which must include: public art, art integration, graffiti parks, art districts, museums, regional collaboration, civic engagement and robust information infrastructures. All are important to the region of the future, to development of a creative community.

A truly creative community can nurture, attract and retain the talent we need to succeed let alone survive in the new economy.

About John M. Eger
John M. Eger, Van Deerlin Endowed Professor of Communications and Public Policy and Director of the Creative Economy Initiative at San Diego State University teaches in the School of Journalism and Media Studies, and the SDSU Honors Program.