If I could teach only one value to live by, it would be this: Success will come and go, but integrity is forever. Integrity means doing the right thing at all times and in all circumstances, whether or not anyone is watching. It takes having the courage to do the right thing, no matter what the consequences will be. Building a reputation of integrity takes years, but it takes only a second to lose, so never allow yourself to ever do anything that would damage your integrity. 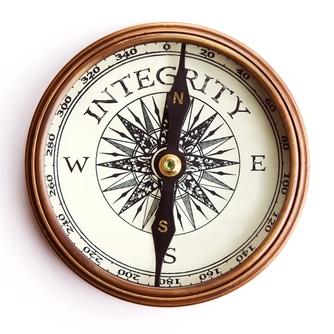 We live in a world where integrity isn’t talked about nearly enough. We live in a world where “the end justifies the means” has become an acceptable school of thought for far too many. Sales people overpromise and under deliver, all in the name of making their quota for the month. Applicants exaggerate in job interviews because they desperately need a job. CEOs overstate their projected earnings because they don’t want the board of directors to replace them.  Entrepreneurs overstate their pro formas because they want the highest valuation possible from an investor. Investors understate a company’s value in order to negotiate a lower valuation in a deal. Customer service representatives cover up a mistake they made because they are afraid the client will leave them. Employees call in “sick” because they don’t have any more paid time off when they actually just need to get their Christmas shopping done. The list could go on and on, and in each case the person committing the act of dishonesty told themselves they had a perfectly valid reason why the end result justified their lack of integrity.

It may seem like people can gain power quickly and easily if they are willing to cut corners and act without the constraints of morality. Dishonesty may provide instant gratification in the moment but it will never last. I can think of several examples of people without integrity who are successful and who win without ever getting caught, which creates a false perception of the path to success that one should follow. After all, each person in the examples above could have gained the result they wanted in the moment, but unfortunately, that momentary result comes at an incredibly high price with far reaching consequences.  That person has lost their ability to be trusted as a person of integrity, which is the most valuable quality anyone can have in their life. Profit in dollars or power is temporary, but profit in a network of people who trust you as a person of integrity is forever.

Contrast that with the person who cannot be trusted as a person of integrity.  Warren Buffet, Chairman and CEO of Berkshire Hathaway said it best:, “In looking for people to hire, look for three qualities: integrity, intelligence, and energy.  And if they don’t have the first one, the other two will kill you.”  A person’s dishonesty will eventually catch up to them. It may not be today, and it may not be for many years, but you can rest assured that at some point there will always be a reckoning.

A word of advice to those who are striving for a reputation of integrity: Avoid those who are not trustworthy. Do not do business with them. Do not associate with them. Do not make excuses for them.  Do not allow yourself to get enticed into believing that “while they may be dishonest with others, they would never be dishonest with me.” If someone is dishonest in any aspect of his life you can be guaranteed that he will be dishonest in many aspects of his life. You cannot dismiss even those little acts of dishonesty, such as the person who takes two newspapers from the stand when they paid for only one. After all, if a person cannot be trusted in the simplest matters of honesty then how can they possibly be trusted to uphold lengthy and complex business contracts?

It is important to realize that others pay attention to those you have chosen to associate with, and they will inevitably judge your character by the character of your friends. Why is that?  It is best explained by a quote my father often says when he is reminding me to be careful of the company I am keeping:  “When you lie down with dogs you get fleas.” Inevitably we become more and more like the people we surround ourselves with day to day. If we surround ourselves with people who are dishonest and willing to cut corners to get ahead, then we’ll surely find ourselves following a pattern of first enduring their behavior, then accepting their behavior, and finally adopting their behavior. If you want to build a reputation as a person of integrity then surround yourself with people of integrity.

There is a plaque on the wall of my office which reads: “Do what is right, let the consequence follow.” It serves as a daily reminder that success will indeed come and go, but integrity is forever.

~Amy (for my daily blogs go to www.amyreesanderson.com/blog)

I am Amy Rees Anderson, entrepreneur, angel investor, public speaker, mentor, and philanthropist with a focus on helping others to excel in their entrepreneurial ventures. I am the founder and Managing Partner of REES Capital, a mentor capital and angel investment firm.

Success Will Come and Go, But Integrity is Forever

U.S. No Longer Top 10 in Prosperity- Why Culture Matters