When you hear about kids like Abbey Fleck, who helped her parents achieve their dream home, adopt a few more kids and put all five through college on her Makin’ Bacon money, it makes you wonder, how did she do it?

Well, if we’re honest, it makes you wonder how your kids can become entrepreneurs — and maybe millionaires — too.

We talked to several kid inventors and their parents about what makes them different from the rest of us. What are they doing that we’re not?

The good news is you don’t have to give up your TV.

Sure, some of the kids are home-schooled and watch ZERO hours of television per week, like Oink-a-saurus inventor Fabian Fernandez-Han, but Cassidy Goldstein, inventor of the crayon holder, said TV is where she gets some of her best ideas. Admittedly, she’s usually making jewelry or doing something else while watching TV, but still, it’s OK — even helpful.

Some kids had a way in — their parents were inventors, like Fleck, or CEOs, like Sarah Bucknel, who invented Magnetic Locker Wallpaper. Others competed in contests through organizations like By Kids for Kids or FIRST Robotics — like Fernandez-Han, Nicholas Fornario, who invented the Tic-Tag-Tac vest, and the Inventioneers, who invented the Smart Wheel.

Still, Fernandez-Han’s dad said he thinks it’s important to teach kids not just to solve problems — but to find them.

Here are six tips from the kids and their parents for how your kids can become entrepreneurs, too.

1. Get them started experimenting young. It’s not enough to just teach your kids: Eat your dinner, clean your room, do your homework, says Norm Goldstein, the CEO of By Kids for Kids and the dad of crayon holder inventor Cassidy Goldstein. Give them a lot of things to tinker with. Cassidy, for example, used to make animals out of pipe cleaners or clay while she was watching TV. Some kids respond to those “artsy” materials, others may be more technical, preferring Legos, for example. Whatever it is, let them find out what they like and what they’re good at and, most important, give them the encouragement and confidence to take it to the next level. And don’t just stand above them — get down on your hands and knees or sit with them at the table to help them or just to give them encouragement, Norm said.

2. Take your kids seriously. It’s easy to park them in front of the TV, say “Don’t touch that, I’ll do it,” or laugh off an idea they come up with as “Oh, those kids and their crazy ideas!” But one thing every kid and every parent said was that it’s so important to take your kids seriously. When a household problem arises, like Cassidy and her broken crayons, ask them, “What do you think we should do?” Or, if your kid has an idea, like Hart Main’s idea for Man Can manly-scented candles, say, “OK, let’s figure out how to make them.” Whether your kid becomes a millionaire or not, it will be an amazing lesson in business and a super shot of confidence that says, “Hey, I can do it!”

3. Don’t do too much — or too little. Kids can only do so much, Cassidy says. They need parents’ help to take it to the next level. Or, to simply look at the child and say, “That’s great! Now what?” Keep pushing them to take it further. By the same token, you have to be careful not to do TOO much. KK Gregory, inventor of Wristies wrist warmers, says her mom was very involved in the business, but let KK do a lot of the legwork. It’s so easy for a parent to take over the kid’s school science project — but you have to resist that urge, KK explained. Hart’s mom said you have to allow them to try things — and even fail. “Let them make their mistakes and learn from them,” she said. “It’s hard when you see that they’re setting themselves up for failure. Hard to let them feel pain. But, when they feel that pain, they’ll realize that it doesn’t hurt as much as they think it would — and they keep moving.” And, she quickly added, with the family’s signature sarcasm: “I have never tripped them on purpose.”

4. Don’t waste time. If your kid has a good idea, don’t waste time developing it right away. First order of business: Check if someone else has a patent on this idea. You can do that very easily through the U.S. Patent and Trademark Office web site —uspto.gov. If you spend time producing a product that is already out there or that there’s no demand for, that’s wasted time — and money. Then, poke around, make some calls. Call that family friend who makes candles, Like Hart did. Find out about other companies in the business, potential manufacturers. Send 100 letters to Walmart asking that they sell your product, like Abbey. And, never underestimate the benefit of good PR — even by your mom. KK says her mom’s PR campaign was crucial to the success of the business taking off!

5. Plug them into networks for young inventors. There are tons of organizations offered right through school they can join to get hands-on experience in being an inventor and entrepreneur, including Odyssey of the Mind, First Robotics and Future Business Leaders of America. Plus, organizations like Girl Scouts, Boy Scouts and 4H also develop a lot of these leadership and entrepreneurial skills.

And, there are tons of competitions they can enter that will give them a good starting point. Intel and Google each have a science competition. By Kids for Kids is basically a clearinghouse for all kinds of competitions sponsored by companies — not just math and science competitions, but in all different types of categories including arts and athletics. Even if they don’t go on to become an entrepreneur or kid millionaire, it will build valuable life and business skills. Plus, there’s usually a cash prize involved, which gives a nice boost to their piggy bank to help fund their invention, pay for college or help them get a jump-start on saving.

6. Be prepared to dedicate a lot of time to the business. All of the kids talked about missing out on fun time with their friends because they had to work on their business many nights and weekends. Parents, too! Look at KK’s mom, who took over the business while KK went off to college and then explored the world for a few years after that. That’s not to say that they had NO fun, just that it required discipline and dedication. But, that work ethic paid off — not one of these kids became divas, asking that their M&Ms be separated by color, when they hit the big time! Hart still finds time to work at soup kitchens, Abbey works with autistic and other special needs kids and KK, in addition to running her company, is a firefighter in her town.

Did you know that the popsicle, ear muffs AND the trampoline were invented by kids? And, more than a few kids have become rich off of their inventions before they even graduated high school.

“Kids are natural innovators,” said Jon Dudas, who used to work for the U.S. Patent & Trademark Office   but is now the president of FIRST,  an organization designed to help foster innovations by kids in science and technology.

One of the youngest inventors, Dudas recalls, was just two. “Her parents had sort of sectioned off a place where she couldn’t open the cabinet doors. She used suction cups and an extension,” Dudas explained. “Her parents thought it was a neat idea—to use for people in wheelchairs with limited movement,” he said. The child had a patent by age four! 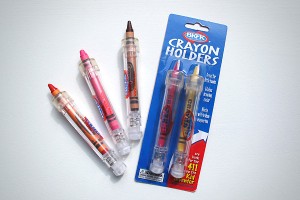 Crayon Holders are clear plastic tubes that hold your crayons so they can still be easily used even if they break. Crayon Holders were invented by Cassidy Goldstein at age 11. She was working on an art project and when she went to her box of crayons she realized they were all broken. Cassidy was inspired by the little plastic water tubes that are used to keep roses fresh.

At age 12, she interviewed a bunch of patent lawyers (oh, to be a fly in that room!) and they got her idea patented. Then, they licensed the idea out to another company that handled the manufacturing and marketing. Cassidy’s dad founded a company called By Kids For Kids   that helps kids get started inventing and they started selling the crayon holders through BKFK.

The invention earned Cassidy enough money to pay for most of her college education and get her set up with an apartment in New York City after college.

Today, Crayon Holders are sold on BKFK.com   for $2 for a pack of two. Cassidy, now 23, works in product development for jewelry designer David Yurman . 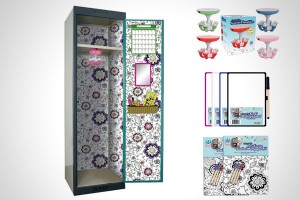 Sarah Buckel invented magnetic locker wallpaper when she was in eighth grade in DuBois, Penn. She wanted a colorful locker that looked like the ones of the kids who starred in TV shows on the “Disney Channel,” but didn’t want to have to deal with peeling off the gummy residue of contact paper at the end of the year.

It just so happened that right around that time, her father became the CEO of a company called MagnaCard, which made magnetic business cards. Sarah asked him if they could make up some of her designs for magnetic locker wallpaper ($7.99 for three sheets) and they were quickly a hit. In the first year, Sarah made more than $1 million. What did she do with the money? Buy a house? A fast car? Nope, she and her family bought the company. 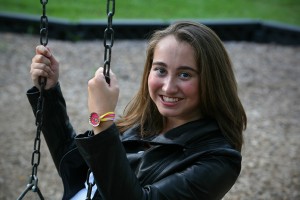 Maddie Bradshaw of Dallas, Texas (pictured left) says her family has always been creative — and into recycling. When she was 10, she wanted to decorate her locker. So, her uncle, who had an old Coke machine, gave her 50 bottle caps. She painted them and put magnets on them, and even gave some to her friends, who loved them. She liked them so much she decided to turn them into necklaces so she could take them anywhere with her.

With the help of mom, Diane, she withdrew $300 she had saved up from birthdays, Christmases and the tooth fairy, and went out to buy supplies. She took about 50 of the necklaces, called “Snap Caps,” to the local toy store, and they sold out in a few hours.

She made her first million by age 13. Today, Snap Caps are a must-have for tween girls. The company, m3 girl designs, has 40 employees and sells over 60,000 necklaces per month in over 2,500 stores. They also make Snap Cap hair bows and Snap Cap “Huggers” to decorate your Ugg boots.

Where the Magic Happens

Redefining the meaning of doodling!