Yesterday the Obama Administration released its FY 2015 budget request to Congress, which includes funding for the nation’s cultural agencies and programs, such as the National Endowment for the Arts (NEA), the Office of Museum Services, and the Department of Education’s Arts In Education program.

As Americans for the Arts President & CEO Robert Lynch noted in a statement:

The Administration’s FY 2015 request of level funding at $146 million for the National Endowment for the Arts is unfortunately insufficient, considering $154 million has been proposed by the Administration each of the two previous years. Senate appropriators were ready to match this funding each of these years. Investment in the arts is an investment in our nation’s culture, education, and economy. Although it is very welcoming to see the Administration continue support for Our Town and the NEA/Walter Reed Healing Arts Partnership programs, now is the time to boost investment, not reduce it. To reduce support provides both an inconsistent and confusing message for the creative economy in America. This is even more important as the President has recently nominated a new chair to lead the NEA. Arts advocates from across the country will join together on Capitol Hill for Arts Advocacy Day on March 25th to lobby Congress to increase NEA funding to $155 million.

This chart illustrates the inconsistent nature of the Obama Administration’s funding requests for the NEA: 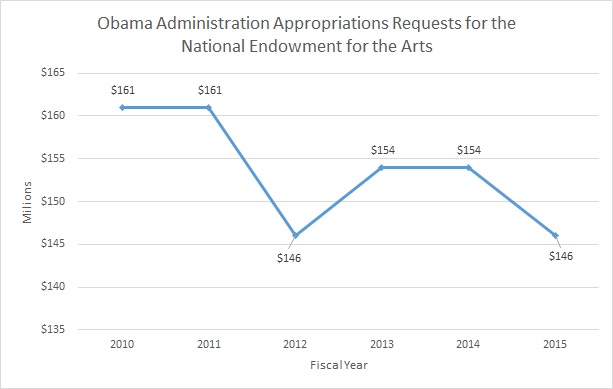 The following is a comparison of the Administration’s FY 2015 budget request and FY 2014 enacted levels:

The President’s request is traditionally just the first step in the legislative budgeting process. Next, the U.S. House of Representatives and U.S. Senate offer their proposals that will reflect their own particular priorities. Appropriations subcommittee work is already underway with several upcoming hearings scheduled.

Last year, the House Appropriations Interior subcommittee proposed cutting NEA funding nearly in half! Thanks to your messages sent to Congress, through Americans for the Arts- the nation’s leading nonprofit organization for advancing the arts in America- the nation’s signature cultural agency was spared such drastic cuts after an outpouring of support that helped enable Senate appropriators to drive the final result.

Americans for the Arts,  will launch their kickoff advocacy effort at the National Arts Advocacy Day conference on March 24-25.  The deadline for advance registration is Monday, March 10, 2014. Join them in Washington, DC for the only national event that brings together a broad cross section of America’s cultural and civic organizations, along with hundreds of grassroots advocates from across the country. You can register for this national arts action summit and join them on Capitol Hill as the arts community brings a united message to Congress to increase funding for the NEA to $155 million!

If you are not already a member, play your part by joining the Arts Action Fund regardless of if you can make it to National Arts Advocacy Day.  It’s free and easy to join.

Lisa Canning is the founder of Lisa’s Clarinet Shop, IAEOU, the Institute for Arts Entrepreneurship (IAE) and Entrepreneur the Arts.

Staying Ahead of the Curve: Shaping your Music Career for...

What does flexibility do? Reflections on Creative Ecosystem Building