NEA Research on the Value Added By Cultural Industries 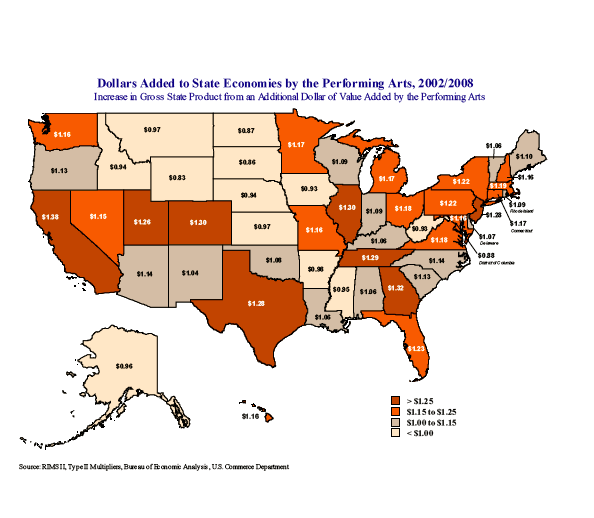 Cultural industries are economic powerhouses and states have the data to prove it, according to a new analysis from the National Endowment for the Arts.  Drawing on data from the Bureau of Economic Analysis, Arts and the GDP: Value Added by Selected Cultural Industries is a new NEA research note that examines the value added by three selected cultural industries: (1) performing arts, sports, and museums; (2) motion pictures and sound recording; and (3) publishing (including software).  Combined, these three cultural industries contributed a total of $278.4 billion to the U.S. economy in 2009.  The NEA research note also looks at dollars and jobs added to individual state economies by these cultural industries.

The note also analyzes how the performing arts and other cultural industries contribute to states in terms of jobs produced and value added by the cultural industry to the Gross State Product (GSP).  Among those findings:

This is the latest in a series of NEA research notes to look at different ways to assign value to the arts.  The NEA research note Arts and the GDP: Value Added by Selected Cultural Industries is available for download in the Research section of arts.gov. 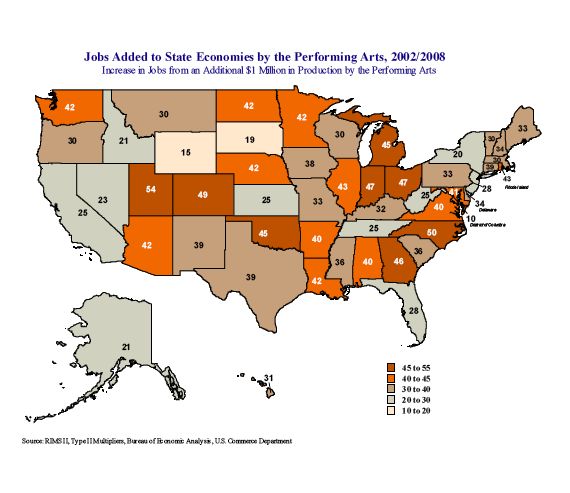 The NEA is the only federal agency to conduct long-term and detailed analyses of arts participation.  For more than 30 years, the NEA Office of Research & Analysis has produced periodic research reports, brochures, and notes on significant topics affecting artists and arts organizations, often in partnership with other federal agencies such as the U.S. Census Bureau and the Bureau of Labor Statistics.The NEA is committed to extending the conversation about arts participation by making data available to both the research community and the public at large.

About the National Endowment for the Arts

The National Endowment for the Arts was established by Congress in 1965 as an independent agency of the federal government. To date, the NEA has awarded more than $4 billion to support artistic excellence, creativity, and innovation for the benefit of individuals and communities. The NEA extends its work through partnerships with state arts agencies, local leaders, other federal agencies, and the philanthropic sector. To join the discussion on how art works, visit the NEA at arts.gov.

Tips to Address Lead Generation Challenges for Your B2B Business

Targeted Website Traffic: Without It Your Site Will Certainly Die

Pros and Cons of Becoming a Locum Tenens Doctor