By Lisa Canning
8 years ago8 years ago
ShareTweet

For companies to pursue innovation, they must have workers with the right skills to conduct research, develop novel processes and products, and operate increasingly complex equipment. Occupations in the science, technology, engineering, and math (STEM) fields are among the most integral to innovation and yet without the creative capacity building of the arts it is no wonder Illinois- and our nation- has statistics that demonstrate sluggish, if not poor, health. 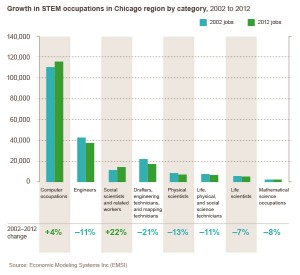 In the past decade, Chicago’s STEM workforce has closely mirrored trends in the national economy. As in other parts of the country, the recent recession had a significant impact on the Chicago region’s STEM workforce, which contracted by 5 percent from 2008 to 2010. However, the region has rebounded, adding 2,500 STEM positions in 2011 and nearly 5,000 in 2012. 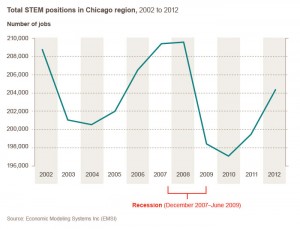 Chicago has a smaller share of its total workforce in STEM occupations compared with the national average, and this proportion has declined during the past ten years. The following chart uses location quotients to highlight regional areas of specialization. Of all STEM fields, the Chicago region currently maintains a specialization only in computer occupations.

The region has also become less specialized in STEM positions over time: every occupation except social scientists had a higher location quotient in 2002 than in 2012. In other words, the Chicago region’s STEM workforce has not kept pace with national trends.

Despite lagging behind national trends, Chicago has demonstrated growth potential in several emerging high-tech areas. For example, the number of biomedical engineers—a subset of the engineering category and the region’s fastest-growing specific STEM occupation—nearly doubled in the Chicago region over the past decade. Other fast-growing areas include agricultural and food science technicians and environmental science and protection technicians. Yet in many of these emerging fields, the region’s growth rate still trails the national average.

What motivates you to explore your creativity? Follow me @IAEOU

Innovation in Illinois needs to move from Stem to Steam

You believe what I believe. Now how can we help...