How can we improve the chances that productivity will flow from our imagination or our creativity?  For starters we need to think of imagination and creativity as distinctively different. These two words should not be used interchangeably.

Think of it like this. If you can visualize something in your mind- the famous person you hope to marry, your first house, the new car you want to buy or your first trip to a new planet in the solar system, then you are a living breathing

IMAGINATIVE human being. All humans posses and can access this amazing power in various strengths.

However,  accessing this power source-while an INCREDIBLY important 1st step- does not require action. We can dream all day and visualize whatever we wish without obligation to render what we see. Here is where the next step comes. To transform our imagination into creativity requires a far more complicated ability-  to transform what we envision in our heads into a reality. This requires a sequence of steps that move our thought processes back and forth between our left ” hard skills” and our right “soft skills”.


Helping individuals transform their active imaginations into productive and hopefully innovative creativity is certainly a lot harder to do. It’s no wonder 60%’s of CEO’s surveyed by IBM in 2010 are concerned about developing a more creative work force to help them  innovate their organizations, huh?


But the real dilemma is how are we suppose to help our world become more creative when there are SO many theorists who have written their own theory about how to sequence the steps between right and left to access one’s creativity?

Let’s see, you have Osborn’s 7 stage model in 1953, and Koberg and Bagnall in 1976. Parnes model in 1977, Amabile’s in 1988 and Mumford’s in 1991. And before them, there was Wallas, Dewey, Rossman, Guilford, Stanislawski, Gordon, Kepner-Tregoe, Arnold, Churchman,  and Zwicky. This is starting to look like the cereal aisle. Confusing! Which “theory” is the right one to help me be more creative?

Some researchers have attempted to identify creativity through cognitive aptitude and personality tests like  MacKinnon 1962, Guilford 1967; and Torrance in  1974. Others have isolated personal creative characteristics described as “cognitive styles” – Kirton did in 1976 in his “problem solving styles” -Basadur 1990 and Selby wrote their own in 2004, as did Prather in  2008.  And if that’s not enough to confuse you, then look at Csikszentmihalyi 1996 assertion that it is complexity, not specific traits or following a thought process, that is the discerning factor in producing a creative personality. Here is his list.

With so many theories about how to ignite creativity, the water seems terribly murky as to exactly how best to generate more of it productively. And s 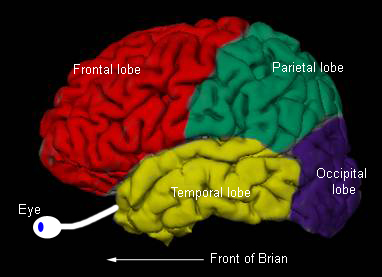 o, yet another researcher enters the picture. It’s Ned Herrmann who introduced his whole brain theory model back in 1998 that has become quite popular now-especially as an employee assessment tool.

According to Herrmann, 5% of the population uses one of the 4 quadrants in their brain. 55% use two quadrants. 35% use three quadrants and only 5% use all four quadrants.  Herrmann’s research shows 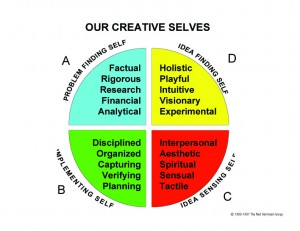 that the more of our brain we use- the closer to “whole brain thinking” we achieve- the more we are able to synthesize information CREATIVELY into productive outcomes. The data reveals that both the right (creative) and the left (linear) need to be full activated to produce the greatest level of productivity.  According to Herrmann’s research this can be developed through synthesis of skills across right and left.  Senior and “C-level” executives tend to be more whole brained in their thinking.

And these are exactly the kind of leaders we need more of to solve our worlds problems.

Under the Radar-Community Arts Network