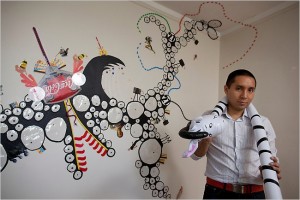 Ever wonder why Steve Jobs and Bill Gates, our white gazelle’s who define entrepreneurial success, never finished college? Is what made them hugely successful creating their own kind of lifestyle simply all based on their ability to out smart everyone or write THE BEST business plan? How did their creativity fit into all of this and what can we learn from how effectively they used it?

Artists, after all, have GREAT ideas all the time. An idea a minute it seems- many spectacular.Â  And yet all the studies show most cannot even make a modest living most of the time.Â  And while this article below demonstrates that we increasingly are going to now see programs popping up to teach artists how to write a business plan, or teach them the business skills they need through an 8 to 12 week one day a week program, I believe, most may be wasting their time.Â  It’s NOTÂ  book smarts OR a well crafted business plan that is FIRST IN LINE to turn our situation around. Sure, its on the list. Don’t get me wrong. It’s in the IAE’s curriculum for sure. But what is REALLY REQUIRED to do the job, is repairing the WAY WE EMOTIONALLY THINK about who we are and what we do that WILL FINALLY MAKE THE DIFFERENCE. And this is NOT an 8 week course! IT IS AT A MINIMUM an interdisciplinary 2 YEAR PLAN.

Thanks to what I have learned from observing highly emotionally intelligent people to help myself, and then some who were not- like my mother- I have learned very well where the differences lie; as well as how to help others deepen their own.

Entrepreneurial intelligence does not rest on what you know. You can know very little. It rests on learning HOW and WHEN to discover WHAT you need to know; and then knowing HOW TO MANAGE the context of what you have learned to achieve your result. All very subtle and it requires close, regular, personal contact to uncover. What will make artists entrepreneurs is building emotional intelligence. I am opening The IAE to build VIBRANT STRONG ENTREPRENEURIAL Emotionally Intelligence Artists. Please help me find the right artists who want to join our first class to SHOW THE WORLD how we TRULY CAN redefine our own lives in positive, healthy and life changing ways. No More Starving Artists. Let’s Change History.

If you doubt a word I am saying, just read the last line of this article. Mr. Barman’s comment says it all…

Creative Types Learning to Be Business Minded By KATE TAYLOR

Paul Barman thinks his is a great idea for a business: personalized, hip-hop versions of the traditional Jewish wedding contract, known as the ketubah, that he writes and sings.

He calls them Audioketubah and, at $1,500, they come in the form of handwritten scrolls and CDs, perfect gifts for a couple who cannot stomach another set of stemware.

Juan Hinojosa makes collages from found materials like Metrocards and food wrappers, and clothing tags that he filches from high-end stores. He often brings an attractive female friend along to distract the staff while he snips off the labels, though he said he has never actually taken anything of value.

On five Saturdays this month and next, Mr. Barman, Mr. Hinojosa and 54 other artists are attending a class paid for by the City of New York that is intended to help them turn their creative works into money.

â€œDoes everyone have Excel?,â€ Peter Cobb, a lawyer and administrator at the New York Foundation for the Arts, which runs the program, asked the class last Saturday. â€œFor next week, your assignment is to make a list of all your expenses for 2009.â€

The sighs and complaints that followed were proof of the challenging task Mr. Cobb and his colleagues have taken on: trying to teach people who like to color outside the lines about drawing up business plans, budgeting and making a sales pitch.

The cityâ€™s cultural sector â€œattracts very, very creative people who have incredible ideas, but they donâ€™t always know how to turn their ideas into financial sustainable entities,â€ said Seth W. Pinsky, president of the New York City Economic Development Corporation. His agency is spending $50,000 on this program and a similar one being run by the Lower Manhattan Cultural Council, with Creative Capital.

It is harder than it used to be to live as an artist in New York City, given the cost of housing, studios and rehearsal space, and the Bloomberg administration does not want artists to leave the city. Culture is a magnet for tourism and a major reason why people in other professions (and often higher tax brackets) want to live here. Ergo, two city-financed courses devised to help artists help themselves.

The group attending the five-week program includes painters, sculptors, photographers, filmmakers, creative writers, actors, directors, dancers, singers, musicians â€” and some who defied categorization, like Ryan Murdock. He said his work encompassed filmmaking, radio documentary and photography, as well as organizing events that brought together â€œsilent films, live music and homemade pies.â€ He said he had recently quit his job in public television, and hoped to arrive at â€œa business structure that will allow me to do everything I want to do, because Iâ€™m too curious to pin myself down.â€

Along with group sessions covering subjects like intellectual property and Internet marketing, each artist has a 20-minute meeting with a New York Foundation for the Arts staff member or an outside adviser to review his or her business plan. At the end of the course, the students can apply for subsidized studio or rehearsal space at the Brooklyn Army Terminal, courtesy of Chashama, an organization that transforms vacant properties into art spaces.

â€œArtists are not taught to plan,â€ said Jackie Battenfield, a painter and the author of â€œThe Artistâ€™s Guide: How to Make a Living Doing What You Love.â€ Too often, she said, theyâ€™re â€œgoing in circles, and thatâ€™s very demoralizing.â€

This is the first time the city has financed such a program, though others, like one at the Bronx Museum called Artists in the Marketplace, have long strived to help artists manage their careers.

Most of the artists in the class had some kind of day job. Many teach. Mr. Barman, who has released several albums, does freelance journalism and teaches hip-hop to high school students.

Mr. Hinojosa works as an assistant to a more established artist, Shinique Smith. He has also sold his own works for as much as $2,000, and thinks that heâ€™ll eventually be able to make a living from his art. One benefit to art made from found materials, he points out: â€œThe supplies are free.â€

Eric Wright, a lanky puppeteer, is one of a few students who already have a successful business. With two partners, he runs The Puppet Kitchen in the East Village, which has built puppets for the Disney Channel, Royal Caribbean Cruise Lines, the Public Theater and the noted puppeteer Basil Twist.

They have more work than they can do themselves and want to expand, but, being artists, Mr. Wright said, they need help with the financial side of things. â€œMost business development courses are for restaurant managersâ€ and people in other traditional businesses, he said, so he was thrilled to find one geared to artists. â€œPeople think that art and business are at odds,â€ he said, but â€œyou can create great art and have it also be a business.â€

Mr. Pinsky said the city plans to follow up to see how many participants succeed in implementing their business plans.

Mr. Barman said that when it comes to his Audioketubahs, he is motivated by much more than just profit.

â€œItâ€™s the most positive, fun, exciting, deep and funny thing Iâ€™ve ever been involved in,â€ he said of writing the songs, for which he often interviews the bride and groom at length, over drinks. â€œEvery single one I do makes everyone so happy.â€

Its not about the money!
How To Make Your Creativity Explode: Create Your Own Strategic...