By Lisa Canning
14 years ago8 years ago
1
ShareTweet

Do Not Enter cautions the sign on the red door. John stood there looking at it, wondering what to do.

The guy at the bar told him that the first red door was the fastest way out of The Blue Bike Shop, but surely he must have been mistaken. And yet there were nothing BUT red doors, with the same Do Not Enter boldly lettered down the hallway as far as he could see.

“What a strange place,” thought John. ” Nothin’ but blue bikes and red doors…”

John had grown up in Nowhere and had never been outside its city limits. John lived down Rural Route 7, a long dirt road, which eventually, if you stayed on it long enough, would take you out of town.

Today was the day John decided he was going to begin his ride out of town.

Impulsively that morning, John had decided after lunch at the Bike Bar, with every dollar he had saved in his pocket from his job at Solo Staffing Services in his pocket, he was finally going to buy that blue Schwinn he had his eye on.

He was so excited the clerk handed him a shot of Don Julio to celebrate as the cash he handed over to him quickly became the bike in his dream. With John’s throat on fire and his heart pounding John asked “Tell me, what’s the fastest way out of town.”

The clerk smiled and said, “Go down the hall, and take the first red door you see. It’s the fastest way.” 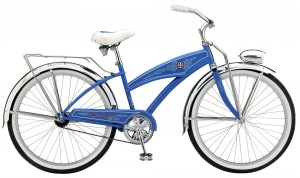 Several minutes had passed as John stood in front of the red door with his new shiny blue Schwinn, reflecting on the clerks last words.

“Why in the world, would this guy have told me to go through this red door if it was not the right door?” John thought.

John had never walked through a door that said “Do Not Enter” in his life. He also had never spent his entire life’s savings on a blue bike and a dream.

John looked down the hall at the other red doors and again at all the other Do Not Enter signs and then reached for the knob to his own.

“What the hell. All my life, people have been telling me “Do Not Enter” this, or do that, or try this, because it is too hard, too risky, too much work or too… something. It’s time I try to go somewhere I want to go.”

When John opened the door, this is what he saw.

“Enter to take your art-your creativity- your genius someplace you want it to go.” ~Lisa Canning

What motivates you to explore your creativity? Follow me @EntretheArts