Creativity and The State of The Union

President Obama delivered his 2011 State of The Union address on January 25. It was 69 minutes long and contained 7,445 words.

Here are the relevant passages:

“We need to encourage American innovation.  Last year, we made the largest investment in basic research funding in history — an investment that could lead to the world’s cheapest solar cells or treatment that kills cancer cells but leaves healthy ones untouched.  And no area is more ripe for such innovation than energy.  You can see the results of last year’s investments in clean energy -– in the North Carolina company that will create 1,200 jobs nationwide helping to make advanced batteries; or in the California business that will put a thousand people to work making solar panels.”

“We need to invest in the skills and education of our people. Now, this year, we’ve broken through the stalemate between left and right by launching a national competition to improve our schools.  And the idea here is simple:  Instead of rewarding failure, we only reward success.  Instead of funding the status quo, we only invest in reform — reform that raises student achievement; inspires students to excel in math and science; and turns around failing schools that steal the future of too many young Americans, from rural communities to the inner city.  In the 21st century, the best anti-poverty program around is a world-class education. And in this country, the success of our children cannot depend more on where they live than on their potential.

When we renew the Elementary and Secondary Education Act, we will work with Congress to expand these reforms to all 50 states.  Still, in this economy, a high school diploma no longer guarantees a good job.  That’s why I urge the Senate to follow the House and pass a bill that will revitalize our community colleges, which are a career pathway to the children of so many working families.”

“That’s the leadership that we are providing –- engagement that advances the common security and prosperity of all people. We’re working through the G20 to sustain a lasting global recovery.  We’re working with Muslim communities around the world to promote science and education and innovation.  We have gone from a bystander to a leader in the fight against climate change. We’re helping developing countries to feed themselves, and continuing the fight against HIV/AIDS.  And we are launching a new initiative that will give us the capacity to respond faster and more effectively to bioterrorism or an infectious disease -– a plan that will counter threats at home and strengthen public health abroad.”

I’m not too inspired.

Presidents have been throwing the word “innovation” into their State of the Union addresses for decades.  But we really don’t have a coherent or powerful innovation policy, program or mindset.

Thomas Kuczmarski,  a Chicago-based innovation consultant, wrote an op-ed for Business week in March of 2009, “An Innovation Action Plan for Obama” where he called for, among other things, Innovation Booster Grants, Innovation Awards, special tax credits, innovation training, a special innovation fund and a cabinet level Secretary of Innovation.

The Athena Alliance,  a nonprofit organization dedicated to public education and research on the global information economy, based in Washington, DC, published a white paper in December 2008, “Crafting an Obama Innovation Policy” with a long list of significant short-term and long term investments.

We’re still waiting on most of these suggestions to take place.

Business leaders have been calling on America to get more creative and to boost its innovation chops for years. 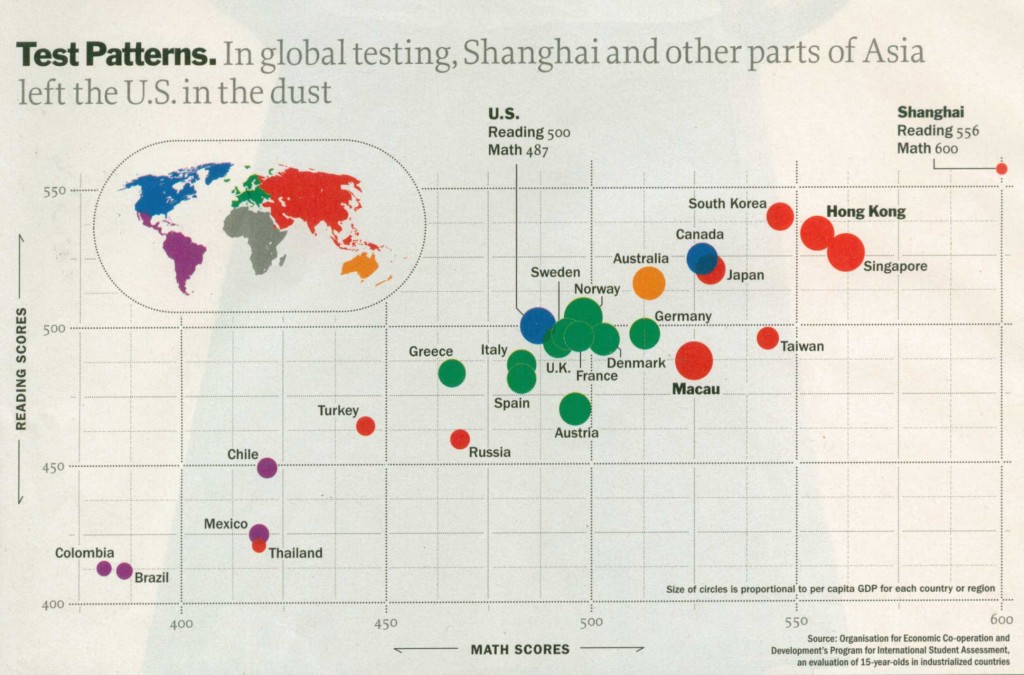 Charts like this showing that the United States is no where near the top of any global educational achievement measures are becoming depressingly familiar.

I have a different path to innovation and keeping America competitive and prosperous.

I would argue that the arts are the pathway to broadening  and deepening America’s creative muscles.

I would argue that teaching the arts at every level of education would be an excellent way to build our collective creative capacities.

I would argue that having America’s children proficient in the arts – be it music, theater, design, computer coding, architecture, singing or painting would build skills needed for a robust economy and would also strengthen our communities.

So as the President and his team put together the federal budget for 2011 and beyond. I would say that one way to achieve this goal of getting to a creative America would be to fund the National Endowment for the Arts and the National Endowment for the Humanities at one billion dollars each. Let the Department of Education be funded to enable states to pass funds to local school districts to hire artists to teach the arts full-time. Let’s make sure every community has a place where people can go to learn about and make art.

Remember the mysterious figure of “Deep Throat” from All The President’s Men? He was coaching the young reporter trying to unravel the Watergate Break-in cover-up. “Follow the money.” He said. I agree.

If you want a creative, more innovative America we’re going to need citizens who are literate, inquisitive, open-minded and creative. That’s going to cost. Let’s follow the money and see if the President puts our money where his mouth is.

Tom Tresser is an organizer, educator and strategic planning consultant. He was the Green Party candidate for Cook County Board President in the November 2010 election.