If the naysayers don’t kill the movement first, the effort to mold a new curriculum for the states offers tremendous opportunities to transform education.

Also known as the “state standards initiative,” the call for a common core is one of the more intriguing methods to spark new ways of teaching. The common core “toolkit,” for example, “proposes that educators engage students in inquiry and exploration of real world problems and interdisciplinary performance tasks”, and opens the door to integrating all the disciplines, merging art and science, and fashioning an interdisciplinary curriculum that enhances the thinking skills young people most need.

Maria Barbosa, a Kennedy Center teaching artist, who participates in Artist-in-Education programs in Maryland and arts integration around the country clearly advocates a unique opportunity. In the Americans for the Arts ArtsBlog, she says using arts integration in the common core is better able “to prepare students to be creative, flexible, and adaptable to the unforeseen contexts of a fast moving 21st Century”.

She isn’t alone in arguing that the push for a common core and the opportunity for integration. Also, blogging for the Americans for the Arts, Richard Kessler, Dean of Mannes College, at The New School for Music, said: 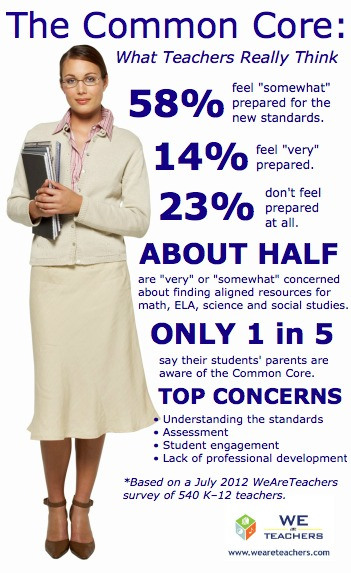 Already thousands of articles, commentary and forums have talked about a common core curriculum… one that was developed by a broad education reform effort including:

The Council of Chief State School Officers and the National Governors Association in collaboration with teachers, school administrators, and experts… to provide a clear and consistent framework to prepare our children for college and the workforce… from national organizations representing… teachers, postsecondary educators, civil rights groups, English language learners, and students with disabilities.

Yet, despite its backing and all the collaborations it still seems tenuous… no urgent outpouring of support for the idea of a common core, many states still saying their own standards do the jobs just fine, or like Ronald Wolk, founder and former editor of Education Week who thinks there are to may more important things to do. In a commentary last month called “Common Sense versus Common Core,” he said it would be a “miracle” if the states would adopt the basic idea… and make it work.

Yes, it’s complicated, a puzzle to some, a difficult choice to many. But it seems on the surface really not so difficult or so puzzling at all? In fact, a common core may be exactly what we ought to be focusing our energies on over the next four years of an administration concerned, as Barack Obama is, with education reform — not that it should take that long to get more states to adopt the new standards.

The idea — now several years old — was simple. Given the emergence of a global economy — call it globalization 3.0 as author Thomas Friedman calls it in his book (now in its eighth printing) The World Is Flat — and every community, every person is suddenly competing with every other.

If the U.S. is to remain its prowess in this economy according to the Oregon Board of Education, who said it best:

Our graduates will compete for jobs with students from… other countries with more rigorous standards. Common standards help ensure that all students, no matter where they live, are prepared for success in postsecondary education and the workforce. Common standards will help ensure that students are receiving a high quality education consistently, from school to school and state to state. Common standards will provide a greater opportunity to share experiences and best practices within and across states that will improve our ability to serve the needs of students.

It’s sad, but not too late if somebody (not the president or the secretary of education who support the common core idea but realize this is a state-led endeavor) like the National Governors Association, the Wallace Fund, the Gates Foundation or some combination starts marketing this concept as the unique opportunity to really change the curriculum — a truly interdisciplinary curriculum that marries art and science — and thus change the mind set of educators and policy makers and parents everywhere with the idea that we really can change the paradigm, and reinvent ourselves for the new economy.

Corralling Support for a Common Core