Canada is looking to make up for lost time in the wake of the COVID-19 pandemic, setting its sights on adding more than 1 million migrants to its population over the course of the next three years. After the health crisis forced Canada to close its borders in the spring, the country’s similarly aggressive immigration plans were quashed. Facing a shortfall in its immigration targets, Canada is back with another plan.

The move is part of a trend in which countries hit hard by the COVID-19 pandemic are looking to migrants to fill voids in the workforce and bolster an ailing economy. Canadian Immigration Minister Marco Mendicino said the government is paving the way for more than 1.2 million migrants eligible for permanent resident status to enter the country over the next three years, including 401,000 in 2021 , followed by 411,000 and 421,000 in 2022 and 2023, respectively. The outlook is part of what’s known as a levels plan proposed to Parliament annually under the Immigration and Refugee Protection Act.

“Immigration is essential to getting us through the pandemic, but also to our short-term economic recovery and our long-term economic growth. Canadians have seen how newcomers are playing an outsized role in our hospitals and care homes, and helping us to keep food on the table. As we look to recovery, newcomers create jobs not just by giving our businesses the skills they need to thrive, but also by starting businesses themselves. Our plan will help to address some of our most acute labour shortages and to grow our population to keep Canada competitive on the world stage,” stated  Immigration Minister Mendicino.

Canada has not reached its projected levels of immigration in over a century, when in 1913 they allowed 401,000 migrants in, an amount that it hasn’t neared since. As a country with low birth rates, Canada typically welcomes 300,000 immigrants into the country each year under Prime Minister Justin Trudeau. If it achieves its lofty goal for 2022, Canada will set a record for the number of migrants welcomed into the country in its history. Companies like Sharemoney have been out front for migrants to send remittances back to their home countries.

The lion’s share of admissions, or 60%, will originate from the economic class, which comprises professionals and skilled workers, through various programs, such as federal skilled workers, Canadian experience class, startup business class, caregiver classes and many others.  This allocation is followed by family, refugee and humanitarian immigration classes.

Canada’s reliance on the migrant community comes amid a one-two punch of an aging population, with nearly 20% of its residents over the age of 65, and a low birth rate of below 1.5 per woman. As a result, they are facing headwinds in expanding the economy, especially in the wake of COVID-19.

In a tweet, the immigration minister described the country’s reliance on the migrant community, saying that prior to the pandemic, Canada’s goal for fueling the economy through immigration was “ambitious,” adding that it has now become “vital”. 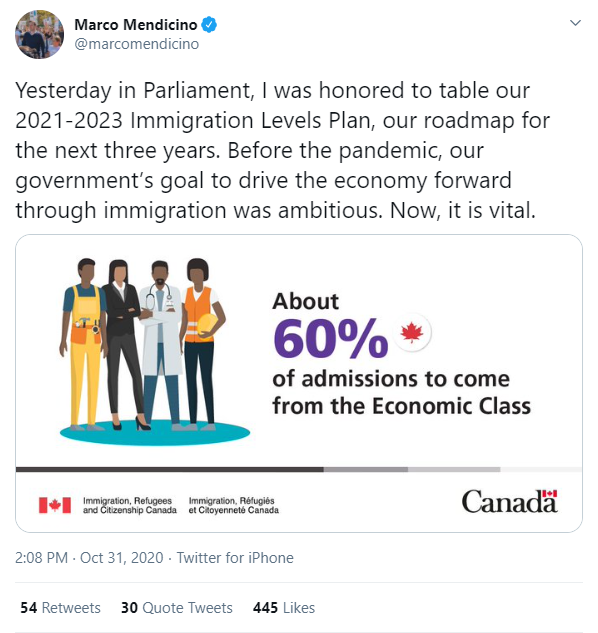 On top of the levels plan, immigration Minister Mendicino also introduced a plan to attract students from Hong Kong to the country via an open work permit that will pave the way for permanent residency in Canada. The permit allows Hong Kong residents with a focus on young people to either come to or stay in Canada, where they can earn valuable work experience. This sets the wheels in motion for their permanent residency in the country. Travel restrictions between the two jurisdictions have been eased.

Canada’s economy expanded in August and preliminary results suggest that September saw more of the same. Economic growth is expected to slow in Q4, however, and the economic recovery will likely be dragged out in 2021. The migrant program is therefore needed more than ever.

Canada Poised to Welcome 1.2 Million Migrants Over Next Three Years

Link Building - What Is It?

Reasons Why You Need Financial Widgets to Your Website