By Lisa Canning
7 years ago7 years ago
ShareTweet

Miami, FL – Today, Crowdfund Capital Advisors (CCA) in conjunction with The Crowdfunding Center published the first quarterly state crowdfunding rankings: “JOBSIMPACT Small Business Crowdfunding Index: Best to Worst Crowdfunding Environments for Entrepreneurship and Small Business.” The index reveals the impact of crowdfunding on jobs and entrepreneurial activity in every state and 100 cities across the USA. It assigns each city/state a JOBSIMPACT rating which is a first of its kind job creation indicator attached to the economic output from crowdfunding campaigns.

The results show almost 40,000 new jobs as a result of crowdfunding. While jobs created and the economic benefits are very unevenly spread across the USA, it does present a huge opportunity for legislators who focus on crowdfunding, entrepreneurship and entrepreneurs.

Barry James, Founder and CEO of The Crowd Data Center collected data on more than 150,000 live crowdfunds so far this year. He said, “The results are very striking. We can immediately see how crowdfunding has taken hold in places like Washington, DC and San Francisco and what it is capable of achieving. Some very promising challengers and ‘many in the middle’ follow this.  But there are whole states that look more like a desert and it’s, paradoxically, in these that the most pent-up potential most probably exists.”

Sherwood Neiss, Principal at CCA observed, “Mid-term elections are an ideal time for elected officials and policymakers to reflect upon local, regional and national competitiveness – especially how access to capital impacts startups, entrepreneurship and small business growth. Since the Financial Crisis, the capital market conditions haven’t improved for our nation’s job creators, which is why entrepreneurs and businesses are seeking new financing alternatives like crowdfunding.  Crowdfund capital-friendly cities, states and countries are much more appealing for entrepreneurs.”

Richard Swart, research director for CCA who helped validate the JOBSIMPACT rating said: “The funding environment for entrepreneurs, businesses, investors and the economy does not end at the federal level. All regulations matter, whether imposed at the federal, state or local level of government. The crowdfunding environment varies by state, and small business owners have taken notice. As we enter election season, it will be important for voters to understand where candidates for US Congress, Governors, Secretaries of State and Commerce as well as state legislators stand on all forms of crowdfunding including rewards/pre-sale, equity and debt crowdfunding. ” 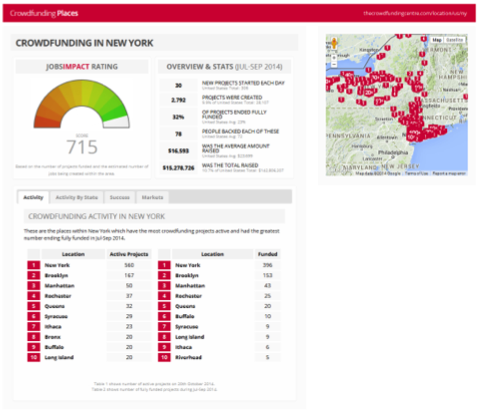 Jason Best, Principal at CCA added: “Some states are situated well from an access to capital standpoint, with others moving in the right direction.  For example, Elected officials in states including Washington, DC, New York, Vermont and Oregon are enjoying the benefits of higher than normal utilization of crowdfunding. The leaders in these states have an opportunity to use this as a powerful point of differentiation in bringing innovative individuals and companies to their state. Increasingly candidates for office at both the state and federal level must have a strategy for effectively harnessing the power of the crowd in building small businesses.”

Neiss concluded: “If legislators enable crowdfunding to flourish, then that will be good news for entrepreneurship, businesses, investment, economic growth and job creation in each state.  Elected officials from states ranking poorly have a great opportunity, as well as some work to do, to make themselves competitive from a small business and crowdfunding perspective.” A state-by-state comparison report was sent to each US Senator and Mayors in the 100 largest cities in the USA.

—————————————————————————-
Crowdfund Capital Advisors is a for-profit advisory, research and education organization dedicated to promoting access to capital via crowdfunding to protect small business and promote entrepreneurship.  For more information please visit www.CrowdfundCapitalAdvisors.com.
TheCrowdfundingCenter.com is the world’s leading source of in-depth data, analysis and insights into Crowdfunding helping catalyze and power research directly and indirectly. They publish the quarterly “State of the Crowdfunding Nation” report having collected data on more than 150,000 live crowdfunds so far this year.

Crowfunding and Crowdsourcing: Do you know the difference and how...