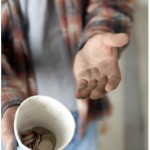 Following my last posting on the fiscal health of theatres, my fellow ETA blogger, Jim Hart contacted me with some provocative questions. I thought I’d address two of them and forgive me, Jim, for paraphrasing slightly:
1. Can we teach our aspiring theatre artists to avoid the traditional path of the begging cup?
2. Would it be so bad to have a slew of privately-owned for-profit theatres (to avoid the begging cup that comes with 501c3 status)?

How many times have we gone to a performance at our regional professional nonprofit theatre and been greeted at curtain time by the artistic director or managing director making a plea for support? The curtain speech plea has become ubiquitous in the last 18 months as theatres have struggled to stay alive. But, it’s a technique not confined to the nonprofit market. Broadway cast members have been making their annual Broadway Cares/Equity Fights Aids fundraising plea for the six weeks leading up to the New Year. Both certainly have the air of the begging cup about them. The most successful development efforts, however, have nothing to do with begging during a curtain speech. Successful development efforts have at least three major components: partnering with community, developing audience, and effective grant-getting.

When development focuses solely on asking for money, it is doomed to fail. (So Jim, I agree with you on this point.) However, when a theatre (or any non-profit arts organization) meets a community need, then the community will support it. The question is not how can we avoid the begging cup? but rather œwho can we partner with in our community? and how can we better serve our community? I don’t have any easy answers, but in general, arts organizations need to be focused outwardly rather than inwardly: Who are our constituents and how can we give them something of value? Rather than what do we need to do to maintain our current programming and structure?

This is where the second component comes into play: audience development. If the current audience is not supportive, its time develop new audience, which usually means a change of direction or expansion of programming, rather than a contraction. I’m trying to expand our audience for my current institution by offering more performances, some at nontraditional times. Is it working? Unfortunately it’s very unclear, but we haven’t lost anything in the trying (yet). We took a risk. We’re expanding services to niche audiences like elder hostels and children. But we can’t measure success based on ticket revenue alone. We will measure success on whether or not the organizations and programs we partner with want to continue the relationships we form.

I listed effective grant-getting as a component of development because grant writing and grant-getting have several benefits. The mere act of writing grants (which are usually only available to nonprofits) forces an organization to focus and articulate its mission. Grant getting is also a form of community partnerships. Foundations want to partner with organizations that help advance the mission of the foundation. It is a bi-directional relationship.

Jim expressed a utopian idea of having many small for profit theatres, privately owned, and risk taking. Here Jim and I disagree. We have a model of for-profit theatres: Broadway. Some are privately owned, some owned by large corporations, but very very few are risk-taking and none of them small. (The risk-taking exceptions are the commercial Broadway productions mounted by nonprofit theatres  here we see riskier fare like Sarah Ruhl’s In the Next Room). But, much as small independent bookstores and mom-and-pop grocers are few and far between, so too would be privately owned for-profit theatres. Such theatres would have no choice but to pander to the ticket buying audience (a demographic not always known for risk-taking) and, driven by a profit motive, would not stay small for long because if successful, there would be buy-out offers from Comcast or Universal or Disney. Making art is risky enough without the art makers having to invest and risk losing significant capital.

That having been said, maybe theatre makers should look to filmmakers for a for-profit model in which a company is formed around a specific project, money raised for that project, and then return on investment may (or may not) take place after distribution. Perhaps the way to have a for-profit theatre infrastructure is to avoid the institution structure completely and consider each project as an independent venture. That would be an idea worth pursuing  but fundraising for a for-profit project-based venture brings us full circle back to the begging cup. Perhaps there’s no escaping it.

HAPPY NEW YEAR! (And don’t forget to give generously to the arts organization of your choice!)